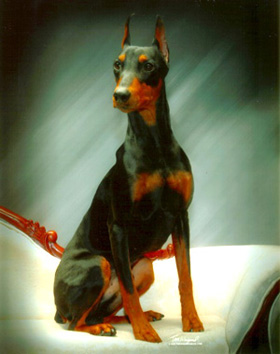 The German Pinscher’s ancestry dates back to the Middle Ages in southern Germany where he was bred to hunt beaver, badger and otter. By the 15th century, a breed known as the Rattler had evolved and was renowned for his hunting of vermin and protector of the home. There were two varieties of the Rattler: the smooth and rough, and it is believed that the German Pinscher is the descendant of the smooth Rattler. The Standard Schnauzer is believed to be closely related and was originally referred to as the Wire Haired Pinscher. Often mistaken as a small Doberman Pinscher, it was the German Pinscher, however, who came first and inspired the creation of the larger version of the breed. The German Pinscher was also used in the development of the Miniature Pinscher and other Pinscher types.

The German Pinscher is well known for his loyalty, devotion and protectiveness toward his family. He is always alert and vigilant and, if threatened, he will display fearless courage. These traits make him a remarkable companion and wonderful watchdog. He also has excellent natural hunting abilities which gives him a keen sense of prey, drive and determination.

The German Pinscher is a very active, high energy dog and requires daily exercise. He is a dog who loves to have a job to do and the breed excels in several areas, including: Obedience, Tracking, Agility, Service and Show Dogs.

The German Pinscher is a medium sized dog with an elegant appearance. He has a strong square build, is muscular and powerful. His coat is short and dense with a healthy gloss. His colour may range from fawn to stag red, and black with tan markings.

Like all breeds of dogs, the German Pinscher is susceptible to certain health problems, including:

If you are considering the adoption of a German Pinscher puppy, or any breed, it is very important to be selective in choosing a responsible and reputable breeder. Ensure that the prospective puppy’s parents have all health clearances. Based on the German Pinscher Club of America’s (GPCA) Code of Ethics, health clearances for the German Pinscher should include OFA or PennHip certification for Hip Dysplasia and CERF for eye problems. The GPCA also recommends vWD DNA testing and Thyroid function testing for both the sire and dam. Breeding of any dog should not be done until after they have been proven to be free of evidence of significant hereditary diseases. (For more information on selecting a breeder, see the articles on the General Information page.)

The German Pinscher is very intelligent, strong willed and determined. With these characteristics, he can be stubborn and manipulative if he wants his own way. He is, however, eager to learn and makes a wonderful companion who enjoys having a job to do. Due to his protective nature, early socialization is a must and overall training should be done in a firm but gentle, consistent and patient manner.