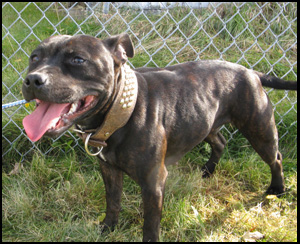 The Staffordshire Bull Terrier originated in Britain some 200 years ago and was bred as a pit fighter which he excelled at for more than a century.

The Stafford is courageous, tenacious, stubborn, curious, protective, intelligent, active, agile and has a strong “prey drive”. These personality traits together with his affection and devotion to his family and children in particular, make him a wonderful family companion. The Stafford has been referred to as the “children’s nursemaid” or the “nanny dog.” They are extremely tolerant and affectionate toward children.

Although the Stafford can adapt well to many living environments, this is an active breed who requires vigorous daily exercise. His high level of energy also means that the breed is successful and enjoys participating in many dogs sports and activities, including: Competitive Obedience, Agility, and Flyball.

His coat is short, smooth and close to the skin. He may be solid red, fawn, white, black, blue or brindle or any of these with white.

All Bull and Terrier breeds — The American Staffordshire Terrier, the Bull Terrier, the American Pit Bull Terrier, and the Staffordshire Bull Terrier share the Bulldog as a common ancestor. They also all share a natural love of people, although for some this love will not necessarily extend beyond their family members. The AmStaff is known to have a more serious demeanor, while the Bull Terrier is well known for his sense of humour. Staffords have a very strong “prey drive” and are extremely sensitive to the emotions and feelings of their family members.

The term “Pit Bull” is often used to refer to a breed type as well as different breeds of dogs, including the Staffordshire Bull Terrier. Other breeds commonly referred to as “Pit Bulls” include: the American Staffordshire Terrier and the American Pit Bull Terrier. Some believe that all of these breeds of dogs originally came from the same pit fighting stock over 100 years ago but have been bred to differing standards and are now known as distinct and separate breeds. Others believe that these dogs are simply different strains of the same breed. History aside and whether or not they are distinct breeds, if well bred, they all share a natural love for people and the Bulldog as a common ancestor.

If you are considering the adoption of a Staffordshire Bull Terrier puppy, or any breed, it is very important to be selective in choosing a responsible and reputable breeder. Ensure that the prospective puppy’s parents have all health clearances. The Staffordshire Bull Terrier Club of Canada recommends that all breeding stock be tested and cleared of hereditary disorders. Tests should include: PHPV/HC, OFA, CERF, and Brucellocious. Breeding of any dog should not be done until after they have been proven to be free of evidence of significant hereditary diseases. (For more information on selecting a breeder, see the articles on the main General Information page.)

The Staffordshire Bull Terrier is a very intelligent dog who’s training should start at a young age. As with all dogs, puppy training classes as well as socialization are very important. Training should always be done in a positive, persistent and patient manner.