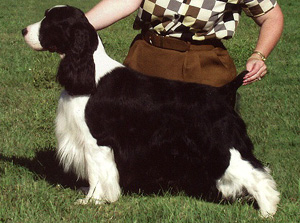 For centuries, the English Springer Spaniel breed was among favourites with sportsmen in Britain. He is so named because he was used to “spring” at game to make it get up and run or fly away.

The English Springer is quick to learn, eager to please, attentive and very friendly. He enjoys life as a family companion but is a very able dog in the field as well. With a presence that suggests pride, power, endurance, agility, style, balance and enthusiasm, the English Springer has the distinct spaniel character. He is a cheerful dog with a sense of humour, affectionate, good with children, and a good watch dog who does not bark without reason. English Springer Spaniels are active in conformation, hunting, obedience, agility, flyball, tracking and as therapy dogs.

A medium-sized sporting dog with a compact body, the ESS is well-proportioned. His coat is of medium-length with a glossy appearance and sufficiently dense to be waterproof and weatherproof. He has some feathering on the ears, chest, legs and belly. His coat may be liver or black with white markings, liver and white with tan markings, black and white with tan markings, blue or liver roan, or predominantly white with tan, black or liver markings. His pendulous ears, soft gentle expression, sturdy build and friendliness make him an unmistakable member of the family of spaniels.

If you are considering the adoption of a English Springer Spaniel puppy, or any breed, it is very important to be selective in choosing a responsible and reputable breeder. Ensure that the prospective puppy’s parents have all health clearances. Breeding of any dog should not be done until after they have been proven to be free of evidence of significant hereditary diseases. (For more information on selecting a breeder, see the articles on the General Information page.)

For the English Springer Spaniel, the CHICNOTE 1 database includes health screenings for: