Is That A Labradoodle? 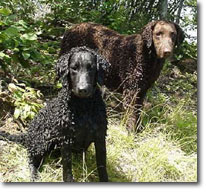 Labradoodles are a mix of two pure bred parents. (Lab and Poodle) They do not all look alike! You never know what you are going to get.

Don’t get me wrong, people that own these mixed breeds absolutely love them. I think adopting a dog from a shelter is a wonderful idea. Just when you see the countless adds for Pekepoos, Chi-Poos and other mixed breeds in the newspaper with hefty price tags, remember that you can in a lot of cases find those same mixed breeds at your local shelter, or contact an all breed rescue organization and adopt a dog in need.

Here is a great site on Labrador Retriever Rescue. They occasionally have lab mixes available:

A Labradoodle is a cross between the Labrador Retriever and Standard Poodle.

Originally bred to try to produce a non shedding service dog, Labrador Retriever breeders around the world took hold of the idea of this mixed breed with great gusto. As Labradoodle breeders appeared, the results of the crosses were not very consistent. Litters were produced with some having the double-coat of the Labrador and some having the single coat of the Poodle.

With their popularity soaring, Labradoodles have become the “Breed du Jour” and pet stores, puppy mills and backyard breeders are capitalizing on it’s fame, selling fluffy puppies of dubious parentage and breeding to an unsuspecting public world-wide.

There are some breeders who are trying to keep a tight reign on how Labradoodles are bred. Some are doing health screening for HD, Cardiac and eye problems. But many are just trying to capitalize on a new fad breed, saying that because it is a cross it has the best qualities of both parents, wrapped up in a package that has hybrid vigor and no health problems. Any time you bring two living breathing creatures together, be they pure bred or Heinz 57 variety, you get a combination of both parents. You can get all the bad things from both parents just as easily.

Lately, in the press, purebred dogs have been described as “genetic nightmares”. It is true that purebred dogs have many genetically linked traits ranging from those that are innocuous unacceptable colors or coats in some breeds, for example or easy to repair (entropion, the turning in of the eyelid) to those that are crippling or life-threatening, such as (HD) hip dysplasia or (PRA) progressive retinal atrophy.

It is not true that mixed breed dogs are free of genetic diseases due to “hybrid vigor.” Dr. George Padgett, a leading canine geneticist, wrote in Dog World in January 1997 that mixed breed dogs can have the same genetic diseases as the original parent breeds. Padgett said that his files include information on 102 genetic defects identified in mongrel dogs, more than double the number identified in the Cocker Spaniel, one of the country’s most popular breeds.

If you breed a Cocker Spaniel to a Poodle and cross it with a Doberman you get a Cock-a-Poodle-Do!

Have you noticed that a lot of dogs lately seem to sport adorable names like labradoodle, peke-a-poo and cockapoo?

Poodles are popular dogs with which to mix breeds. They are friendly, very intelligent and possess a rare and wonderful asset: they are low-shed. So it stands to reason that the labradoodle, peke-a-poo and cockapoo are also low-shedding, smart and lovable dogs.

They are not purebreds as defined by the American Kennel Club or the Canadian Kennel Club. These breeds are registered as “miscellaneous” under the Continental Kennel Club, which promotes and encourages crossbreeding. (Essentially, they encourage the deliberate production of Mutts!) With so many animals in shelters, where millions must be put to sleep for lack of good homes, it’s irresponsible to breed more animals for their “chic mutt” value. Breeders may say, for marketing purposes, that a pup is a purebred labradoodle, but this is just salesmanship.

They are not allergy-free dogs. All dogs shed; some shed more than others. The labradoodle, cockapoo and other crossbreeds may have less dander and require less coat maintenance than their purebred parents. But don’t be fooled by claims of “no-shed” dogs.

If you have allergies, and are looking for a dog

Allergies are associated with the dander produced by the dog and not the dog himself or the dog hair. Dander is the dry skin that flakes off, floats through the air and induces the classics signs of allergy. A low dander dog is what you should be looking for. The best thing you can do is choose a breed, and spend some time with one for a day, and see how it affects your allergies.

“Oodles of Doodles” and “Lhasa Poo”

These are some other mixed breeds that people saddled with catchy names, to make you think they are an actual breed, and dupe you into paying big bucks! You can find them all at your local animal shelter!

Some people do not seem to understand what exactly it means for a dog to be named a pure breed. There are constantly breeders popping up claiming to have just invented a new breed by simply crossing two already established breeds.

Many people will have you believe that these dogs and others are in fact “rare” purebreds and therefore worth a substantial amount of money. It is up to you as the consumer to know exactly what it is that you are paying for, if it is simply a mixed breed then why not just go to the pound and get a dog, you will probably find the same “breed” that is in desperate need of a home.

Much Ado About Poo

Read this great article by Canis Major Publications: Much Ado About Poo

This article was reproduced with permission from SoftMaple Curly Coated Retrievers
(Please note that text shown in italics were added to include Canadian links and information.)
Links Updated 19 January 2011